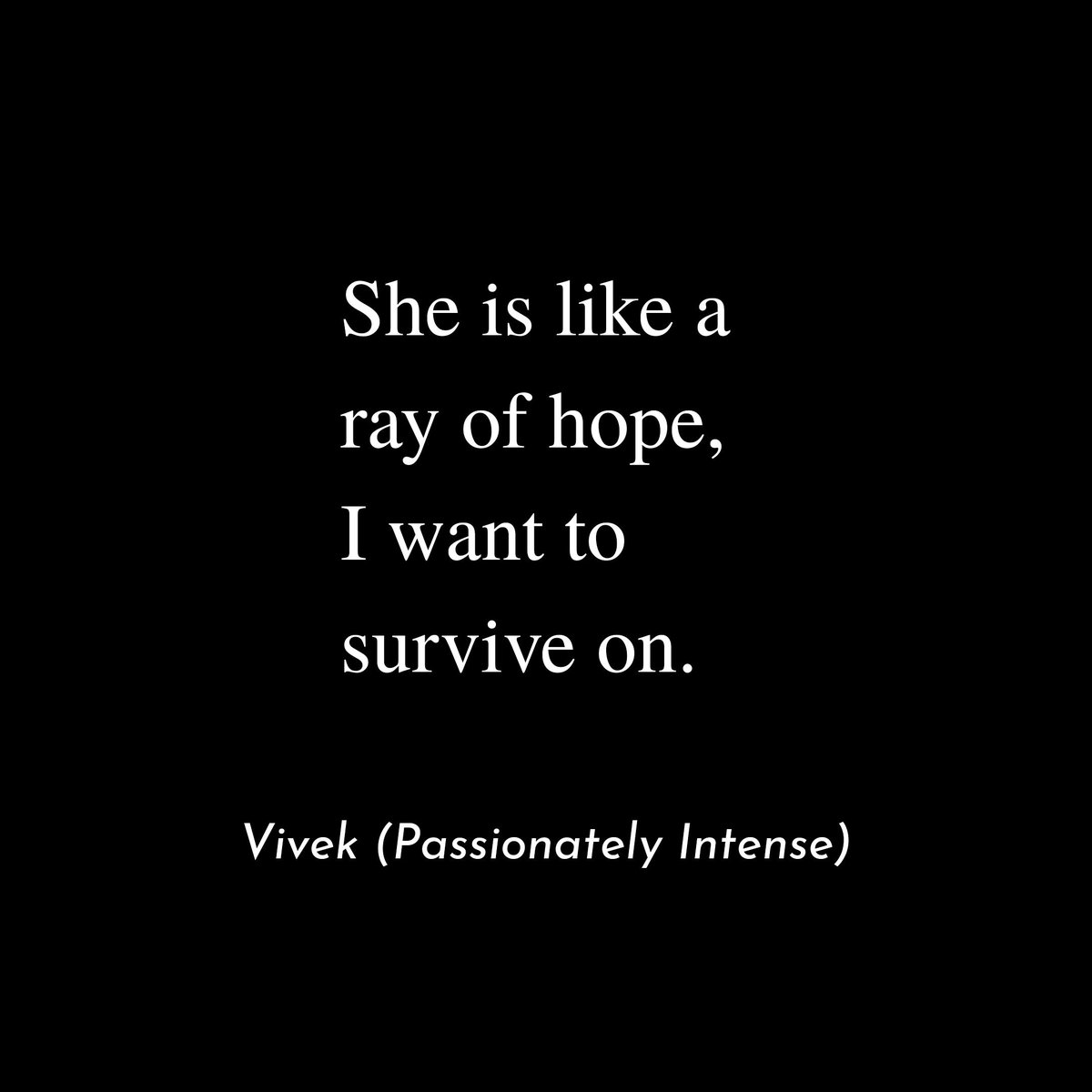 In the midst of a crisis, the only thing which keeps you going is love. Share this post with your ray of hope or tag them in comments section. Make #love go viral! #PassionatelyIntense #PassionateLove #IntenseLove #poem #poemsporn #poetry #MircroPoetry #poems #poetryloverspic.twitter.com/OvT0kzhGR7

Love is love,⁣ When you are dressed in a dapper tuxedo⁣ And she is dressed in a bright red dress.⁣ You both swirl on the dance floor⁣ Just like royalties straight out of a⁣ Much loved Disney movie.⁣ ⁣ Love is love,⁣ When you steal a coy glance at him⁣ And he smiles back at you.⁣ You tuck your hair behind your ears⁣ While the bangles on your hands clink⁣ Like a classic Bollywood scene.⁣ ⁣ Love is love,⁣ When it's raining cats and dogs⁣ And a boy and his girlfriend take⁣ Shelter under a broken shed⁣ And steal a kiss and blush,⁣ Weaving a fairy tale.⁣ ⁣ But why is it not love⁣ When I am a man⁣ And my love is a man⁣ And we know we want⁣ To spend this lifetime⁣ And all other lifetimes together?⁣ ⁣ Why is it not love⁣ When I was raised by⁣ Two women, who fought against⁣ Everything and everyone⁣ To build a life together,⁣ Hoping for happiness?⁣ ⁣ Why is it not love⁣ When my best friend at college⁣ Wants to be with someone⁣ Who used to be a man⁣ But is now the prettiest lady⁣ You'll ever lay your eyes upon?⁣ ⁣ You gloat at the validation of your love⁣ For it comes to you so easy⁣ But your stomach churns at⁣ The mere mention of our stories⁣ Is it because your love is too bleak⁣ To keep going through the tests of time?⁣ ⁣ by Sonal Sai (@_swagittarius_) #pride #lgbt #lgbtq #queer #lgbtqcommunity #bisexual #trans #cis #loveislove #freedom #poetrycommunity #writersociety #micropoetry #poetrypassion #wordgasm #poemsporn #poetsofig #surprisinglyshortstories #sss 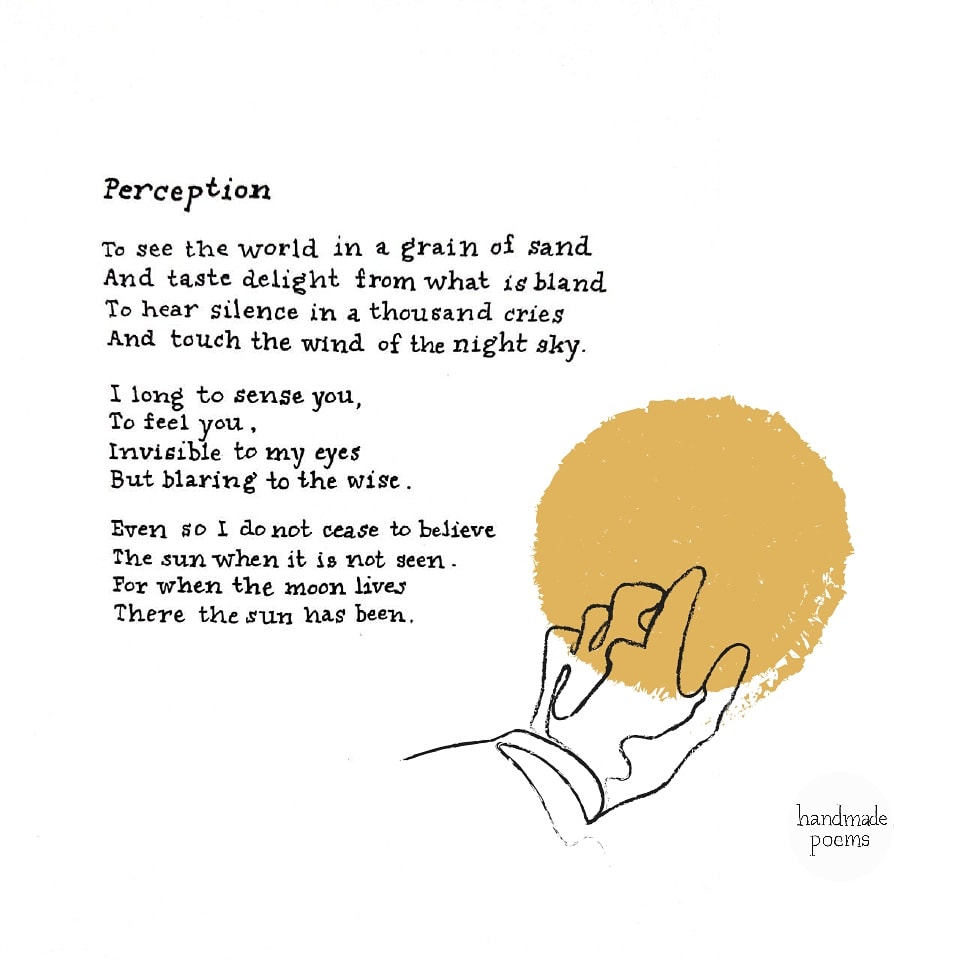 When something doesn't work for us, we filter in order to serve ourselves. And yes, we love and filter to serve our own. Our love for supremacy, dominance, and oppression only serve the world we lock ourselves in. We need to accept that this world is bigger than our own little bubble and that in this big, big world we are all equal. And as the great Charles Darwin said, "Ignorance, more frequently, begets confidence than knowledge." We need to open our eyes and leave our own bubble, for when we see the world for what it is, we learn to understand each other. I hope we remove all reasons that cloud our mind from understanding each other, from loving one another. Let the sun [love] shine its brightest by removing all these damn filters. . . . . . . . . . . . . I don't draw/paint a lot but I thought I should do one for George Floyd. My little contribution and support for this cause. 🖤🖤🖤

I'm sure most of you have felt this way at least once in your lives. Thanks for the support ©Artemis8221. #poetry #poemsporn #instagrampoet #poetryislife #poems #poet #poetsofig #poetic #poetrycommunity… https://www.instagram.com/p/CA96urmHSS2/?igshid=1d9jcz02tk3g7 …

women who're hard to write about limp their way to márquez's desk, with broken legs and strings for hands, only to be discarded like expired whole wheat multigrain bread. they are scratched upon torn pages of diaries from 1947 that reek of martyred blood and memories of homeless nomads who pay their homage through letting stories from the time they went swimming in jalandhar's largest pond, and from the day they scarred their tongues with the hottest raan in lahore peek through every succinct exchange of word they have while searching for a roof again, and again, and again. women who're hard to write about sometimes find themselves between the lines of neruda's torn poems; somewhere, amidst his twenty love poems, there they breathe, in the song of despair. their chapped and tattoed lips are painted with clear glycerine; their crow's feet wear smeared kohl like war paint; and when they meet eyes that of poets, they are more of hollow black holes and moss, and less of ebony wood that smells of a restless cup of brewing robusta which tastes of pretzels dipped in maple syrup. I've heard of poets who've spent the last of their breaths, looking for metaphors in their plastic lips and aged eyes like an orphan looks for his mother's milk- in vain. women who're hard to write about paint their bodies with red wine on broken beds in motels, and burn their oesophagi with all strength whiskey, in hopes of burying agony at the pit of their stomachs, which are the deathbeds of a thousand poets' diluted metaphors, who dared name their skin, 'skin', and not the burgundy coloured saree of their mother who wears stars in her hair and words on her tongue that feel of shrapnels thrown around like confetti that tastes of rainbows, and dips her palms in in the barren lands of her green lush collarbones and dares call herself beau-ti-ful, instead of waiting for her sons to write her petty poems about her sliding youth. because, you see, their mother, happens to be one of the women who're hard to write about, as well. srishti, the song of despair. _ prompt by @thepenwielders #tpwprompt : women who're hard to write about #globalagecaption #silverleafpoetry #scribblersword 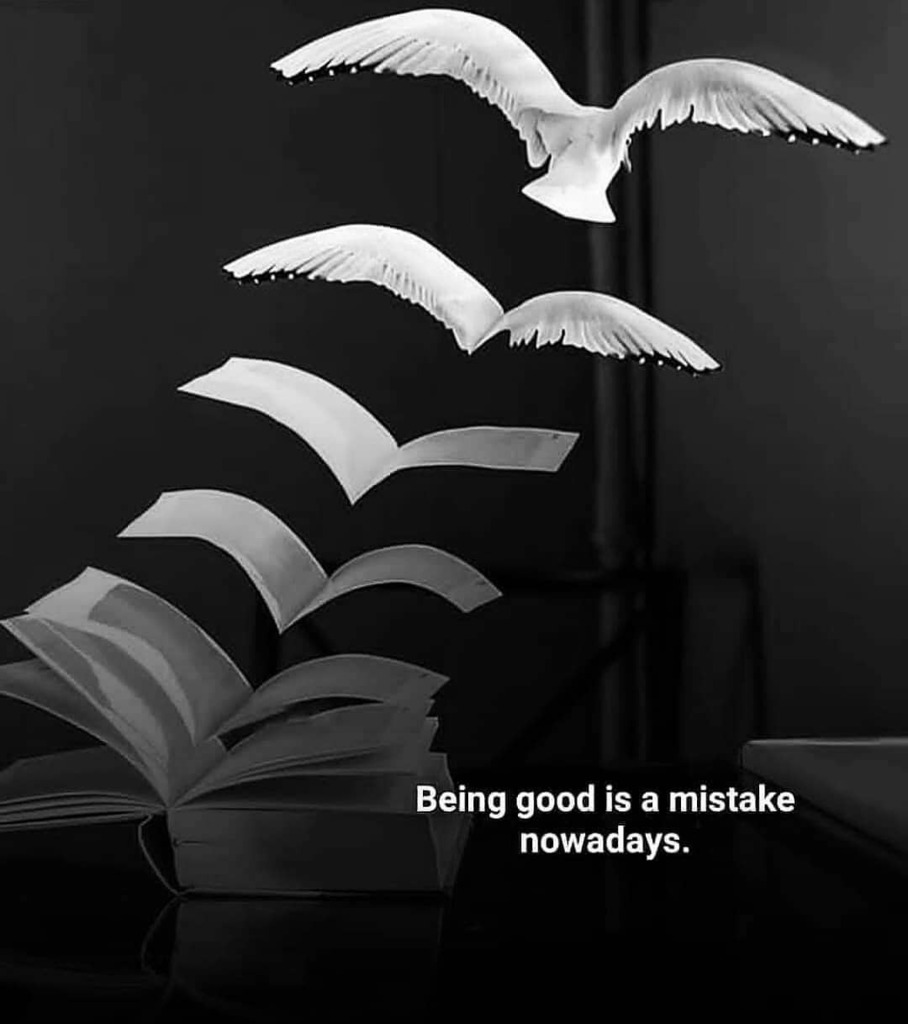 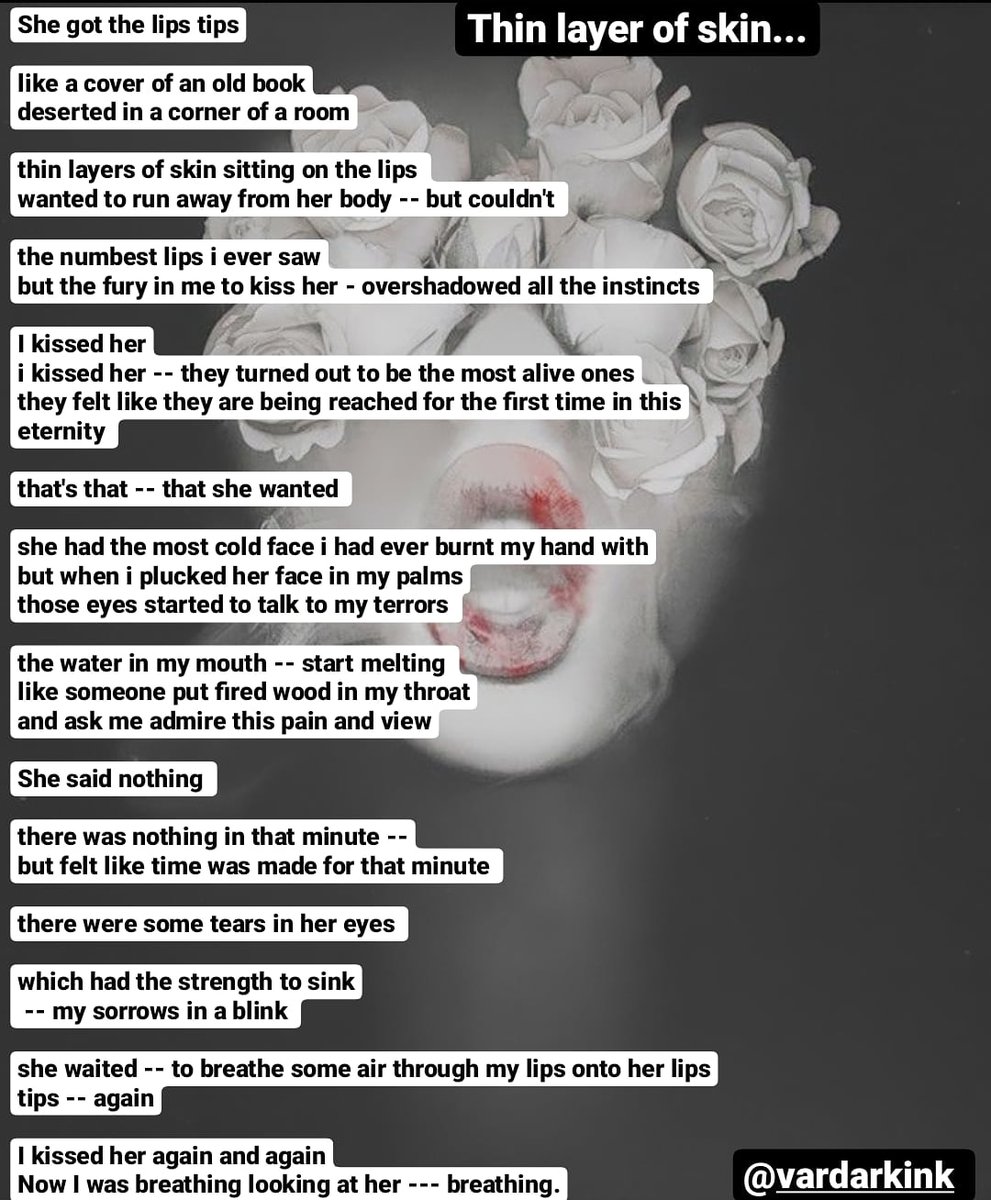 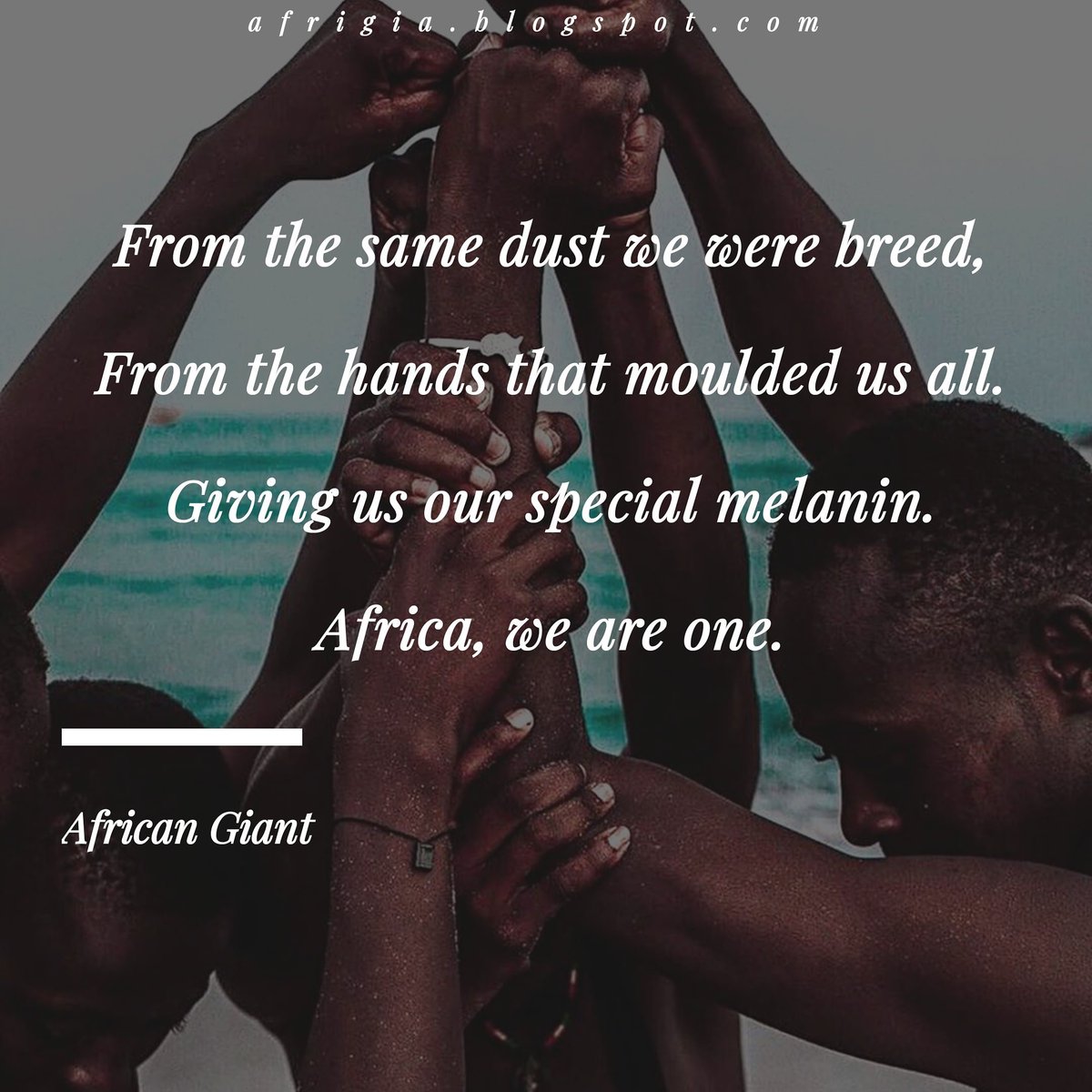 What is it? That I want to be. ⁣ No certain goals to aspire,⁣ But a lot of people to admire. ⁣ What do I do with this,⁣ This crippling sense of frustration and power.⁣ ⁣ Tonight, the clouds are the only form of light.⁣ Like that, maybe I'll find my sight.⁣ The sight which will help me fight,⁣ Maybe someday,⁣ I'll rendezvous the neighbouring kite.

This world is a warzone. No matter how hard you try, no matter how hard you fight like a fuckin' soldier, there will be some days when you will fall. You will just fall after everything. But those are the days which matter, because they will give you the opportunity to rise and shine like a star. . . . . //Picture from Pinterest// . . . . #micropoetry #microtale #creativewriting #creative #quotesoftheday #quotestoliveby #quotes #instagram #instagood #instadaily #warzone #people #stardust #quoteoftheday #penned #spilledink #art #pinterest #writingcommunity #writer #writersofbhopal #writersoﬁnstagram #igers #igwriters #poemsporn #thoughtcatalog #poetryisnotdead #aesthetic #aestheticquotes #inspirationalquotes

Aesthete. I recently discovered this word and have ever since been fascinated by it. This might explain my sensitivity towards you. The way you make me feel. The way my entire world lights up when you're speaking and everything feels okay. You are complicated and hard to understand. But then again if understanding art was so easy then would it be any intriguing? It wouldn't. . . You require patience. Time. You want to be understood but you don't know how to make it happen. Loving you takes effort, like all good things do. So even when I don't understand you , I try my best to. You made me an aesthete. God is an artist and YOU ,my love, are his Masterpiece. . . ☆☆☆☆☆☆☆▪︎▪︎▪︎▪︎▪︎▪︎☆☆☆☆☆☆☆☆☆☆☆ Tag someone you want this to see. ☆☆☆☆☆☆☆☆☆▪︎▪︎▪︎▪︎▪︎☆☆☆☆☆☆☆☆☆☆ Like. Share. Comment. Checkout my other posts. ◇◇◇◇◇◇◇◇◇◇◇◇◇◇◇◇◇◇◇◇◇◇ #love #people #loyalty #missinginquarantine #tumblraesthetic #lovelifequotes #aesthetic #photooftheday #loyaltyiseverything #loyal #writersofig #instagram #wordgasm #wordporn #poemsporn #tumblr #writerscommunity #authorsofinstagram #dailyquotes #words #wordsofwisdom #aestheticcity17 #napowrimo2020 #memories #quarantine #thephoenix2603 #iphoenix2603 #youarebeautiful #tumblraestheticgirl #loveyourself

A pregnant elephant didn't deserve a pineapple filled with crackers. It broke her jaw but mostly her heart. She believed humans were nice and kind until she was fed. The fatal pain she went through must've made her regret, why she ate that fruit, why has she become so helpless that she ain't able to save her baby. This is cruelty beyond measure. No strict laws would make this look better. The only solution here is to find the culprits and feed them with what they served and deserve! That would be justice. Follow - @theurban_muse ____________________ DM us your best tiny tales, quotes,poems stories, sayings ____________________ our tag - #theurban_muse ____________________ #alllivesmatter #elephant #cruelty #poeticsgram #poemsporn #poetryporn #poetsofinstagram #writerscommunity #wordswithqueen #dailypost #wordhour #igpoets #bymepoetry #writeups #microtales #poetrytribe #goodquote ____________________ Original content © All Rights reserved © ____________________ Like❤️Share❤️Comment❤️

No we were not the same and we did not put equal efforts in this relationship... I had reached the finshing line without even looking back, I put in all I had.. And you my darling, you had not even crossed starting line yet, you were just standing at a fixed point just expecting to cross the line with me. But did not give a damn to put in what you had to put. No we were not the same. . . #writerscommunity #writersclub #bymepoetryasia #poeticsoul #communityofpoetry #soonweannounceresult #writersofindia #writersofig #poetryporn #spilledwords #newventuresbeginsoon #poemoftheday #igpoem #oltmblog #poems #poemsporn #wordhour #iwillreadcomments #lovepoem #wordswithqueens #writerssociety #writers #poemsofinstagram #typewriter #tbthereforhelp #igpoets #poetssociety #poetsofig #tbtinternational #avoicefromfaraway 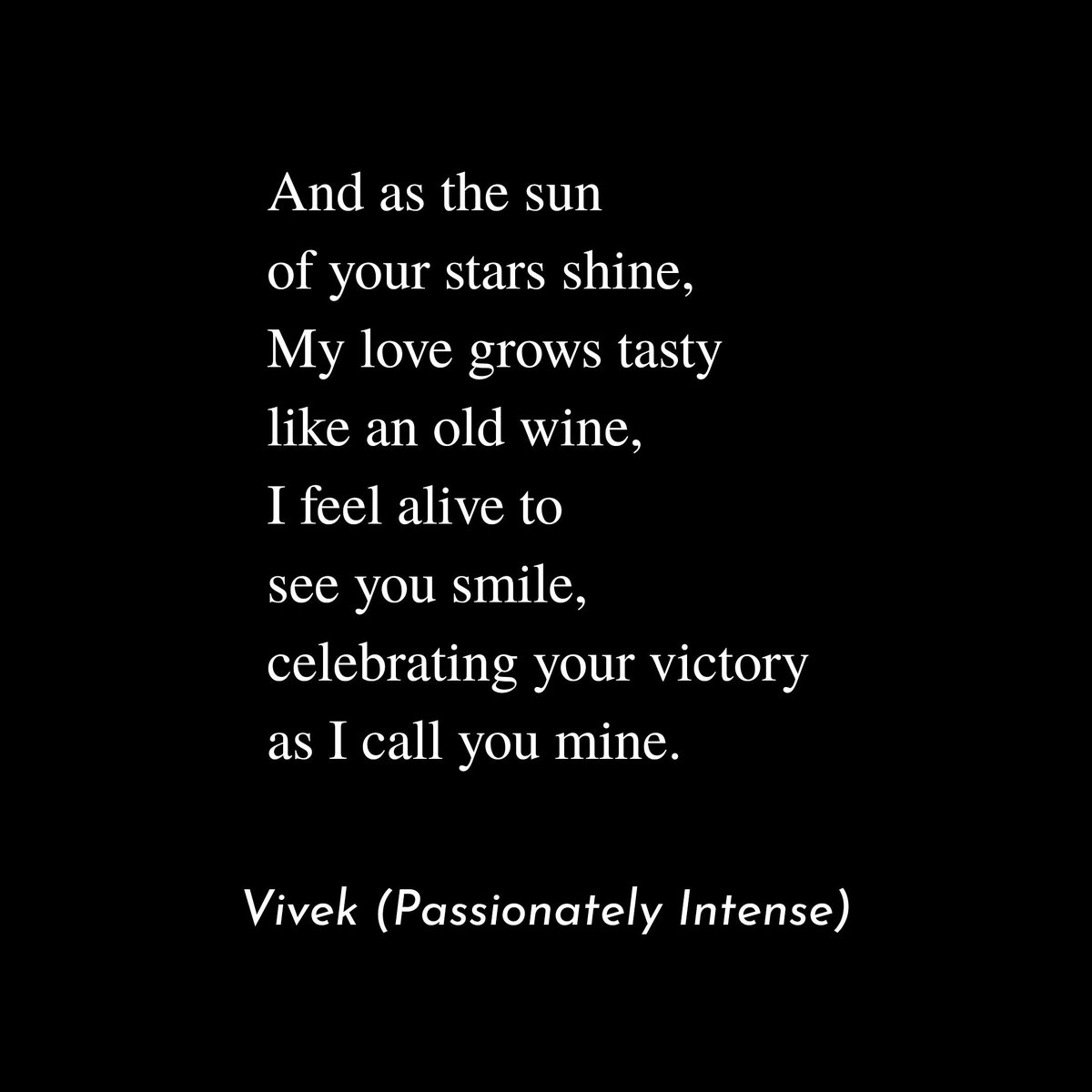 When your love is true, you feel joy to see your beloved succeed. True love is free as it doesn't seek any possession. All it provides with is the wings to fly #PassionatelyIntense #PassionateLove #poemsporn #poems #love #poetryisnotdead #poetry #poem #MicroPoetry #poetryloverspic.twitter.com/1OrXxUBoTM

The Aloe Vera and The Jelly fish.

If you do not go after what you want, you'll never have it. //poemsporn 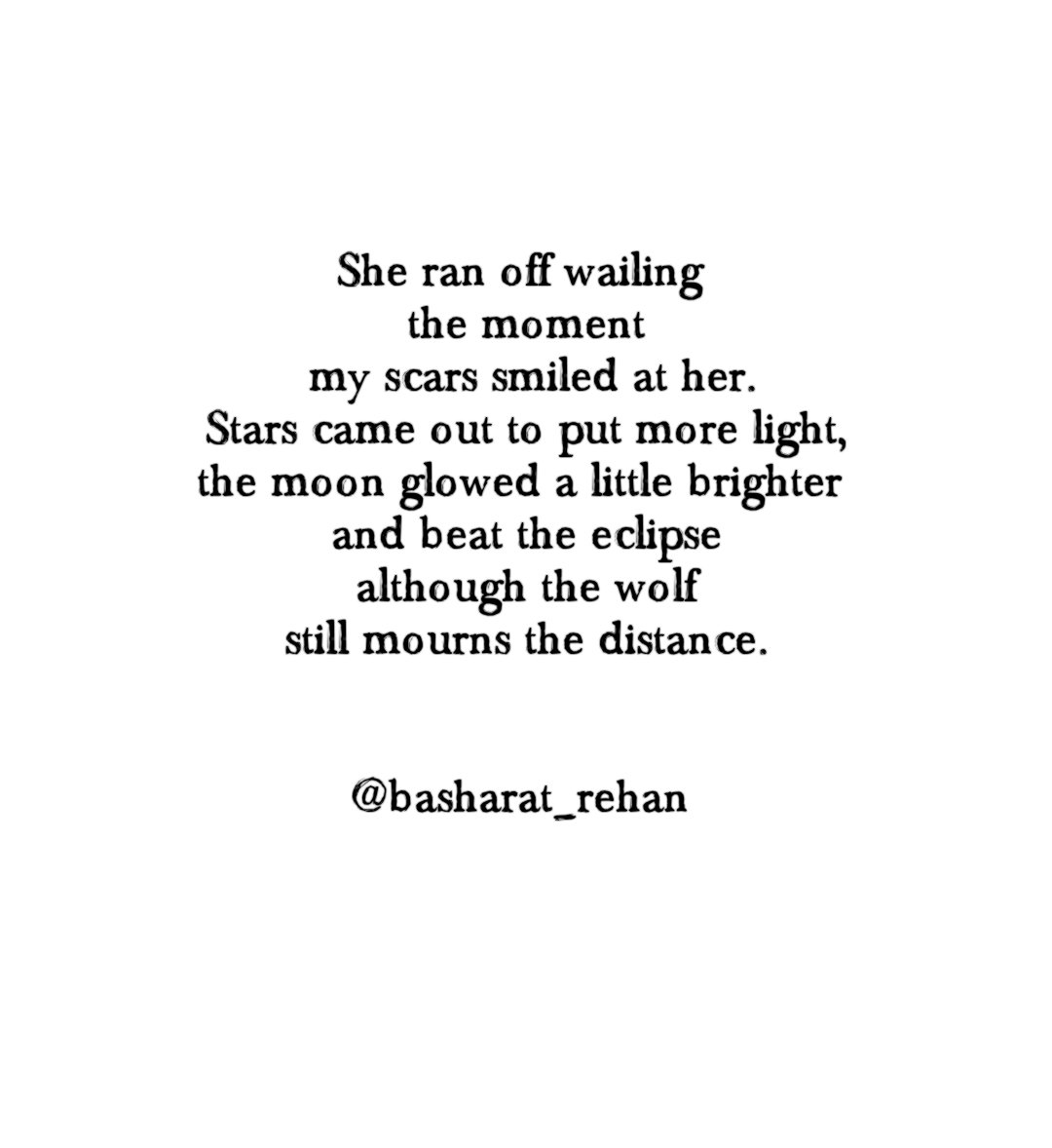