Every good idea from @PMOIndia @narendramodi has unfairly & vengefully been mocked & derided by #imcindore workers & system tht too all in the name of #coronavirusinindia , fruits & vegetble being looted from poors & distributed among staff , who are infact the ones responsible ? pic.twitter.com/su5giHYxvN

Operate lifts, Open doors, Press ATM buttons without touching them! Made of Brass which is inherently antimicrobial. Buy on Amazon(Link on the Website) Proudly made in India. #fightcovid19 #covid_19 #covidindia #covid19 #covid #india #coronavirus #coronavirusinindia

Old video..he is demonstrating how to make a mask incase u need one #coronavirusinindia

We Are Several Steps Ahead, More Than Prepared To Tackle COVID-19: Arvind Kejriwal Delhi: CM Arvind Kejriwal said on Saturday assured Delhi residents that the government was “several steps ahead” of the deadly infection in terms of preparedness and was more than prepared to deal with the situation. Kejriwal also informed that so far, 398 people have died due to the infection. “I want to assure Delhi residents that your government is several steps ahead of the coronavirus,” the chief minister said at an online press conference. “We are making of plenty arrangements that are much more than the requirements. We are more than prepared to tackle it,” he said. According to Kejriwal, COVID-19 positive cases in the state increased to 8,500 in the past 15 days, but only 500 people were admitted in hospitals and most were recovering at home. “We have procured a large number of beds to treat Corona(virus) patients. Though the number of cases are rising, we have sufficient arrangements to treat them,” he added. He informed that last week the city had 4,500 beds for covid treatment. “In the past week, we made arrangements for 2,100 more beds. We now have about 6,500 beds. By June 5, we will have 9,500 beds. We are taking over hospitals and hotels,” he added. Kejriwal added that the government was also developing an app to give people information about the availability of beds in hospitals. Referring to allegedly fake videos being circulated on social media, the chief minister said: “We have to leave politics behind. The country going through a bad time.” #delhicoronavirus #arvindkejriwal #aap #covid19 #coronavirusinindia #coronavirusdeaths 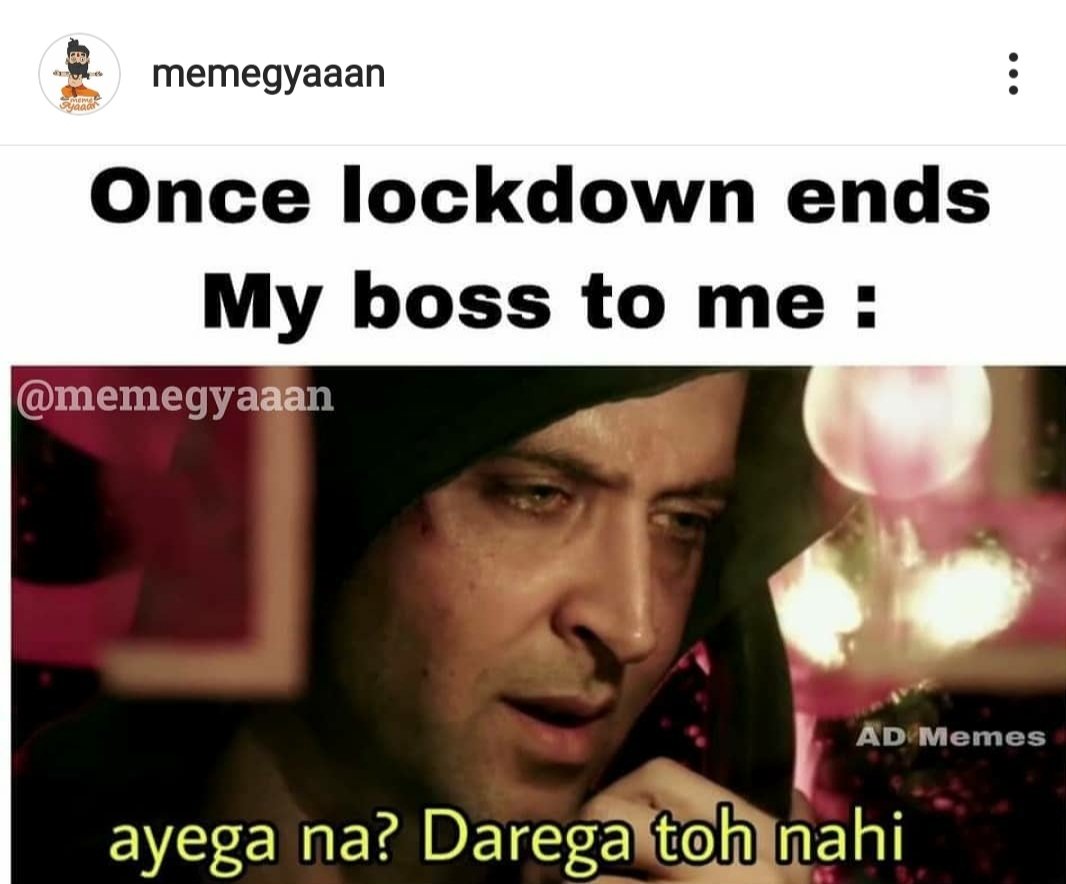 Arpita is our superhero who’s ability to create opportunities at work makes her special. You are a radiant soul that is brimming with positivity and good vibes. Always continue to inspire and soar higher. We salute you. #JSGheroes #covid_19 #covid19news #covid19india #covidsafetymeasures #coronavirusinindia #covidsafetyprecautions #coronaviruspandemic #precautionsforcoronavirus #weareinthistogether #wearestrongertogether #jetsetgoindia

China is in damage control mode, after being blamed for the corona pandemic. It is the world’s ‘Enemy #1’ today. So, is this an opportunity for India to re-set its equation with China and regain lost ground? The Quint's @rohitkhanna719 does a reality check. Catch more: https://bit.ly/2yRRGOs #coronavirus #coronaviruspandemic #China #India #IndiaChina #globalpandemic #COVI19 #coronavirusinindia

If spacex would be launching from India.. It might have to return in between the journey as they would know one of the test pilot is Covid Positive..#coronavirusinindia #AirIndia #VandeBharatMission #spacexlaunch

These COVID 19 heroes celebrating the birthday of one of the patients is one of the most beautiful sights of the day! Video via @jkchanneltv @my_bmc @mumbaipolice @cmomaharashtra_ #Things2doinMumbai #Mumbai #Coronawarriors #Covid19 #Lockdown #Indiafightscorona #MyMumbai #Coronavirusinindia #Mumbaikars

Feel free to ask about Corona virus ur all questions will be answered soon on my youtube channel https://www.youtube.com/channel/UCDb9UpsfuTkx0yMsSnrQ3VQ … And if you r indian then please download arogya Setu app #coronavirus #COVID19India #COVID19Pakistan #CoronaUpdatesInIndia #coronavirusinindia

Our team is fighting COVID-19 relentlessly. We are now conducting COVID-19 tests at our centers. Before booking a home test, please note that a clinical prescription is mandatory for getting tested for COVID-19. To book a test at home, call 9606222293. #Covid19 #CoronaVirus #Covid19Test #CoronaVirusUpdate #Covid19Testing #CoronaVirusInIndia

A ready reckoner for the guidelines announced today for lockdown 5.0. States will have the final say on intra and inter-state movement of people and goods. . . . #lockdown2020 #lockdownindia #lockdownindia🇮🇳 #covid_19 #coronavirusinindia

Imagine a movie like the planet of the apes. Featuring monkeys attack lab technician and run away with covid test. That was fiction. This is real #meerat #COVID19 #IndiaFightsCoronavirus #CoronaUpdatesInIndia #coronavirusinindia pic.twitter.com/bctJtVueoA

Daily Contest Alert!! Chance to win 100rs Amazon Voucher. T&C: *1 lucky winner. *He/She must be a follower in facebook, Instagram and Twitter. (ALL) *Comment the answer before 31 May 23:00. *Winner and correct answer will be announce on 2 June. #contestalert #contesttime #solve #followusformore

I'm so glad to see so many Dms related to my skincare routine. Thanks a ton guys for trusting me so much..😍 I feel so lucky to have such an amazing instafam😍 . Recently received so many DMs regarding Chia seeds and the right way to consume chia seeds.. So I thought of reposting something that I had already shared on my other insta account (@bloomingal_life)..long back right after the first lockdown announcement.. . How to consume chia seeds: . 🍹Add one scoop of chia seeds in one litre of water (lukewarm water preferably) and leave it for 15-20 min and then have it entire day.. As soon as you see that chia seeds are settled at the bottom and water is almost over in the bottle..then refill the bottle again..likewise refill the bottle again n again and consume the chia seeds whole day..This will help in weight loss, controls diabetes, balances blood pressure level.. . 🍹You could also add ginger and lemon to enhance the flavour and that will also help in boosting immunity..Add in a lemon, a scoop of chia seeds, half inch of ginger and crushed mint leaves in hot water...Drink this water throughout the day.. . . Also sharing the reviews about the sanitizer that I use.. . Microshield brand has the best alcohol based sanitizer in the market...Not sure about its online availablity...but try to get this if you can...and off course mask is equally important while you go out.. . . . Disclaimer: I'm not a doctor or a nutritionist...just following this to prevent Covid-19..and sharing with everyone.. follow this if you like it 😌😌 . . . #QuarantinePeriod #corona #coronavirüs #coronavirusalert #coronavirus #stayhappyandhealthy #stayhealthyandfit #coronavirusoutbreak⚠️#killit #Coronavirusworldwide #coronavirusinindia #coronavirusintheworld2020 #coronivirisintheworld #detoxwater #detoxyourbody #detoxyourbodyandmind #detoxjuice #staysafefromcoronavirus19 #covid_19 #fightagainstcorona #killcoronavírus #killcoronatogether #dontgetscaredofcorona #coronaviruskill #SelfLockDown #KeepSanitizing #StayHydrated #Keepwashingyourhands #FightAgainstCorona #DareyNahiLadey 💪🏻🙌🏻

#COVID19 death toll in #India crosses 5,000 mark. Friday witnessed 270 deaths while on Saturday 200 people lost there lives to the deadly #CoronavirusPandemic. Prayers for the deceased. Things have gone beyond control. #coronavirusinindia https://m.timesofindia.com/india/covid-19-8000-fresh-cases-in-a-day-toll-crosses-5000/amp_articleshow/76114557.cms …

#POPxoUpdate: The Ministry of Home Affairs has announced that the nationwide #lockdown in containment zones will be extended till June 30. The ministry also issued guidelines for phased reopening of all prohibited activities in the rest of the country. The night curfew, however, has been relaxed to 9 pm to 5 am. . Currently, India is witnessing a worrisome surge in the #COVID-19 cases, with over 6,000 cases reported every day. It is still important for us to stay home as much as possible and only move around when it's unavoidable. Remember: Social distancing is the need of the hour! . Tag someone who should see this! . #lockdown2020 #StayHomeStaySafe #GovernmentOfIndia #Coronavirus #CoronavirusInIndia #NarendraModi #PMModi

Congress Accuses Gujarat Govt of Hiding Actual Coronavirus Figures in State The Gujarat Congress accused the state government of hiding the actual figures of COVID-19 cases by earlier reducing the number of tests and now by not sharing proper information with the public to portray a rosy picture that infections had reduced in the state. The Congress alleged that the BJP-led government had removed certain information from its coronavirus dashboard, stopped daily briefings and has not shared district-wise figures with people of the state. Instead of containing the spread of coronavirus, the BJP government was busy hiding the real figures of infected people, Gujarat Congress spokesperson Manish Doshi alleged. “The state government has stopped daily briefings by principal secretary health Jayanti Ravi, it has removed crucial information from its coronavirus dashboard, which it used to update daily and it has stopped disseminating details like city-wise cases,” Doshi said. After its miserable failure in combating the pandemic, the state Health Department had now decided to sweep the matter under the carpet, he claimed, adding that the state authorities were playing with public health. “This is being done to portray a rosy picture that number of cases have come down in Gujarat,” he alleged. The state government had earlier reduced the number of tests conducted on a daily basis to detect COVID-19 cases, the Congress leader said. The COVID-19 dashboard at gujcovid19.gujarat.gov.in now contains number of active cases, total samples tested, patients recovered, people under quarantine and total deaths, but nowhere does it have total number of confirmed cases either in the state or districts, he said. Even the daily press release issued by the state health department regarding coronavirus cases no longer contain district-wise break-up of cases, with the focus shifting on recovery of patients, Doshi claimed. Gujarat ranks fourth in the country after Maharashtra, Tamil Nadu and New Delhi in the number of infections reported so far. #gujrat #congress #bjp #modi #coronavirus #covid19 #coronavirusinindia

The signature red and white 'gamcha', that Prime Minister Narendra Modi donned as a mask while addressing the nation to announce the second phase of the lockdown in April, has inspired weavers in UP’s Barabanki district. With the demand for the traditional cloth going up, a manufacturing unit has started making the ‘gamcha’ in large numbers. . . . #gamcha #vocalforlocal #pmmodi #indialockdown #covid19india #coronavirusinindia #facemasksforsale #madeinindia #socialdistancing2020

The centre on saturday extended the lockdown in containment zones till june 30 and said economic activities can restart in a phased mannner outside those zones. only essential activities will be allowed in containment zones. All economic activities can restart in a phased manner outside those zones. The fourth phase of the nationwide lockdown, necessitated by the coronavirus outbreak,was scheduled to end tommorow. #lockdown #covid_19 #coronavirus #coronavirusinindia #gk #genralknowledge