If your first response when someone brings up white people being racist towards POC is to say ‘but what about POC being racist towards whites’ you’re not an ally in the fight against racism Backup: @revoleftistmaymays #leftism #leftistunity #anarchist #anarchism #socialist #socialism #communist #communism #bernie2020 #berniesanders #democrat #revolution #memes #freepalestine #pride #trans #transgender #transrights #transrightsarehumanrights #acab #politics #antifa #blm #blacklivesmatter #justiceforgeorgefloyd

The president is in elite company.

Black lives matter. That’s the first thing I should open with. I live in a neighborhood where people get into gang altercations all the time. When my dad had surgery, the guy next to him was a young black man, who was shot all over his body. He couldn’t even use the bathroom without his moms help. I was lucky to speak with his mom, I was only 17 at the time and she plead to me about wanting his son to turn over who shot him. He didn’t. About a month later, 2 young black men died in a gang related shooting and 5 months later a young Latino man died in a drive by shooting. I haven’t kept count of the deaths related with black and Latino kids in my city bc honestly, it’s heart breaking. Now, black lives matter, of course. But, why do they only matter when a white person is behind the trigger? Why? Why can’t it matter all the time? Why can’t we agree that any death is tragic and every death should he reprimanded. Gangs kill more blacks than a white person ever will. 94% of all black deaths are black on black crime. The 6% of deaths everyone is protesting is good, I think 6% should be 0% but why is it only an issue now? Why are false narratives getting pushed? Why? I live in a city, I was able to get exposed to things at a young age I don’t think anyone should, but that doesn’t start with me blaming anyone else but my own community. Racism isn’t the problem, accountability is. . . . . #politics #trump #trump2020🇺🇸 #trumptrain #republican #conservative #liberal #liberalismisamentaldisorder #latino #democrat #berniesanders #bernie2020 #libtards #democracy #joebiden #biden2020🇺🇸 #bidenmemes #joe #ivanka #prolifeisproscience #prolifegeneration #prochoice #blm #alllivesmatter

Bernie come back, any kind of fool could see There was something in everything about you Bernie come back, you can blame it all on me I was wrong, and I just can't live without you #Bernie2020 #BernieComeBack #BernieOnTheBallot

But when the world needed him the most he vanished#blacklifematters #Bernie2020 @BernieSanderspic.twitter.com/GP90HvdH4h

Breonna Taylor has not been brought to justice. Please keep saying her name. Please sign the petition in the bio. Please light a candle for her spirit. 🕯⚖️⚔️🖤🧿

Don’t tread on me, tread on them lol

Vandals targeted an iconic statue of Christopher Columbus in Boston’s North End by covering it in red paint and tagging it with the phrase “Black Lives Matter" every time someone complains to me about the property I have to explain that I wouldn't trade 5 shot innocents for a single Wendy's burning down. - @genevieve_das_me . . . #socialism #communism #marxism #leftism #marxismleninism #anarchism #stalinism #mutualism #maoism #syndicalism #trotskyism #ancom #technocracy #anticapitalism #antifa #revolution #insurrection #egoism #politigram #discourse #leftism #debate #liberals #warren #bernie2020 #warren2020 #bernie

If you don't think white privilege is a thing comment and I will explain it to you. #blacklivesmatter #brownlivesmatter #nativelivesmatter #blm #bernie2020

IMPORTANT !! PLS READ THE WHOLE THING AND SHARE WITH EVERYONE U KNOW !! my prayers go to the citizens of america and the world. stay safe, i love u all. (i couldnt put all of the slides in, so please search for the whole thread on twitter if u can !!) ❤❤

Accept blame for what? I'm not to blame for the corrupt DNC. I voted for #Bernie2020 in my primary. I'll vote for him again in the national. We're watching a revolution in America. I don't want anything to be violent. That has been Trump's move. America is broken. #GreatRebuld

Bernie hasn't rescinded his candidacy. You can still vote for him by writing his name on your ballot. Vote for #Bernie2020 #BlackLivesMattter

We can still put Bernie in, Howie/Bernie2020

I need everybody to share, sign the petition, it'll be in my bio in a few seconds but this story is so important and we are on a time crunch. #blm #blacklivesmatter #justice #justiceforjulius #trump2020 #bernie2020

Now, I'm not saying the Republican Party is perfect but we ain't nowhere near the Democratic Party😂 - Democrats have given black Americans nothing in return for our votes. This election cycle will be the cycle where BOTH parties are gonna have to work to get the black vote💯 - #BlackNotDemocrat

Has the system fucked you?

stay safe !! bring water and food, but make sure to hide it from the police. wear safety goggles and masks too !! 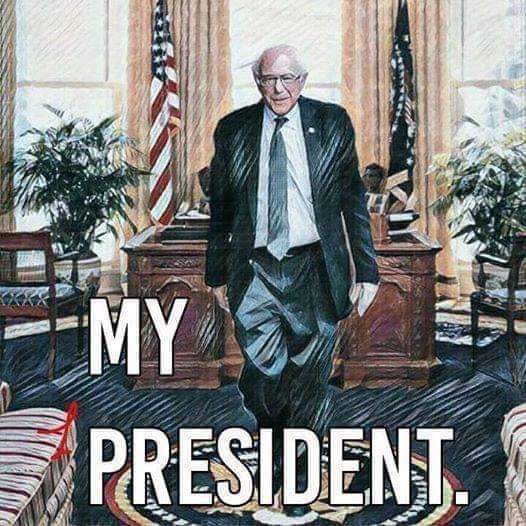 In case you wondered what a president looks like. #Bernie2020 #BernieComeBack #BlackLivesMattterpic.twitter.com/B8agqghQKM

Any American who still thinks we're not in the midst of a revolution consider this: we have nothing to do because of #COVID19 We're broke and jobless, the environment is trashed, profits are up, floods ravage, #Bernie2020 gets swept under the rug for Biden. STOP. #GreenNewDeal

Biden really said he didn’t want his children to grow up in a “racial jungle”. And the DNC still favored him over Bernie in their second attempt to take down trump.

They don’t actually care ab BLM, in case you were wondering.